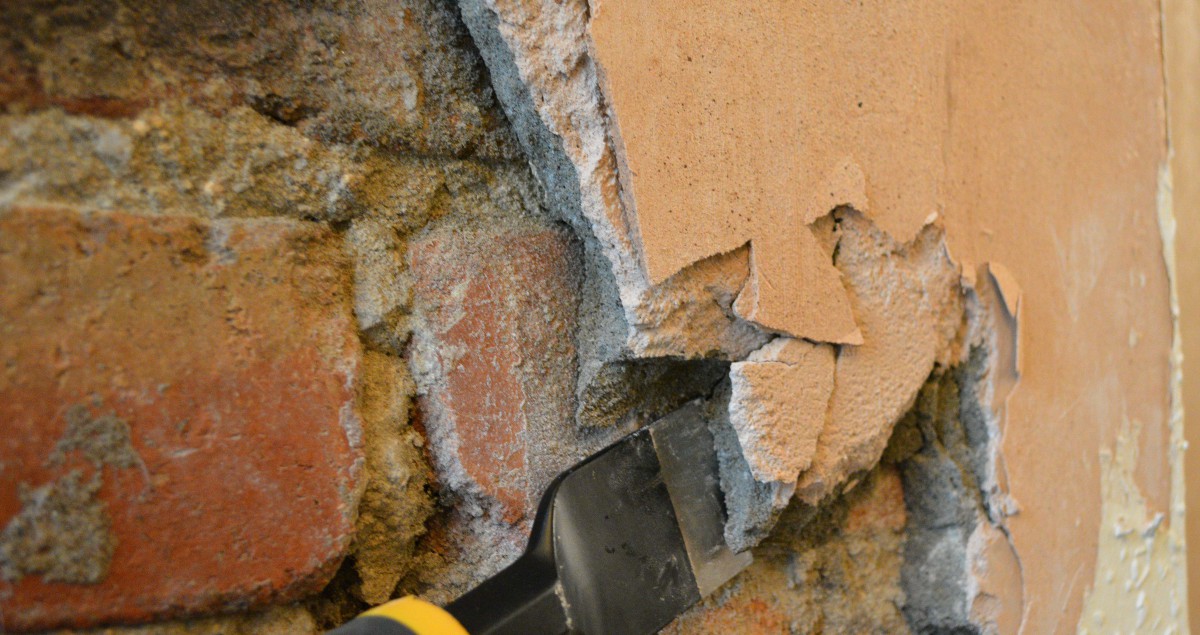 The previous owners had kindly installed a trickle vent in the chimney breast in the living room just before they left. This was to help the chimney air out, since it had been sealed at some point in the past, causing a build-up of moisture, and resulting in the joists to the left rotting off (although we didn’t know they were all rotten at first!). Note to all of you out there – this little and very cheap vent is a must in any sealed chimney breast – nobody likes a case of damp! Anyway, I was desperate to know what was behind this vent. When I knocked the wall, I could hear that it was hollow and assumed it had been boarded over. Was there a fireplace hidden behind? I was particularly keen for some original features in the wake of the destructive 70’s renovations. So I guilty removed the recently installed vent and grabbed the torch on my phone. Was that writing I could see in the darkness behind? My curiosity was peaked, so I took to ripping off the evil woodchip paper – which was worryingly damp and pulled away easily. I figured this was the result of the sealed chimney, causing condensation to settle at the base and soaking the plaster, pushing salts through – the crystals just visible on the surface. The removed wallpaper revealed a new obstruction: the same horrible, man-made wood-effect panels that plagued the hallway. I had no hesitation in ripping these off with a pry bar and some brute force! But now removed, I was faced with more wood. And no original fireplace…. Grrrr! It took me a while to gather the courage to pull this out. Whenever I moved the boards, pieces of dust and plaster fell down the back, forming little sandy piles like in an egg timer. I had visions of releasing a whole pile of debris along with the wooden structure, maybe even the chimney itself! But I eventually gave in to my curiosity again and whipped it out, vacuum cleaner in hand to suck up the dust as it fell (another piece of advice to wannabe renovators – don’t use your lovely Dyson – I nearly broke mine – buy a cheap vacuum for the job). Once in, I found I wasn’t brave enough to look up the chimney – I’m not a whimp, but I’d had my fill of spiders that day and didn’t want to poke my head through a big cobweb! So I sacrificed the camera instead, taking a series of pictures with the flash. I was relieved and delighted to see a very sturdy-looking chimney – well done Victorians, another good job there! Emboldened, I decided I needed to see exactly what we had of the fireplace. And anyway, I loved the idea of an exposed brick chimney breast. So I grabbed Richard for an emergency trip down to Screwfix to get a bolster chisel (I had no idea what this was, but after some quick internet research, I discovered that this was THE tool for the job!). I then began, tentatively, to knock off the plaster with my chisel and hammer. The wet patch was easy to remove since the plaster was coming away anyway. It revealed a thick, 1 inch layer of cement over the bricks, coated by another thick layer of Gypsum plaster. I was disappointed at this, realising that the original lime plaster had been removed from the whole chimney breast and the walls to either side. I wondered whether lime plaster may have helped it all to breathe a bit better too – perhaps this impervious layer had worsened the rot in the joists below? Either way, it was there. And I realised it was going to be VERY difficult to remove. Unfortunately, my attempts were also loosening some of the bricks. Ah well, I sighed, quick tea break, and then I’ll get back to it… proceeding carefully. 3 hours later, and this was all I’d managed to do (see photos below). And I was knackered! I was also aware that the thin steel supporting the bricks above was somewhat warped (notice the slight downward curve). One for the engineer, though I wedged a piece of wood to support it just in case! Think I’ll leave the rest for another day!