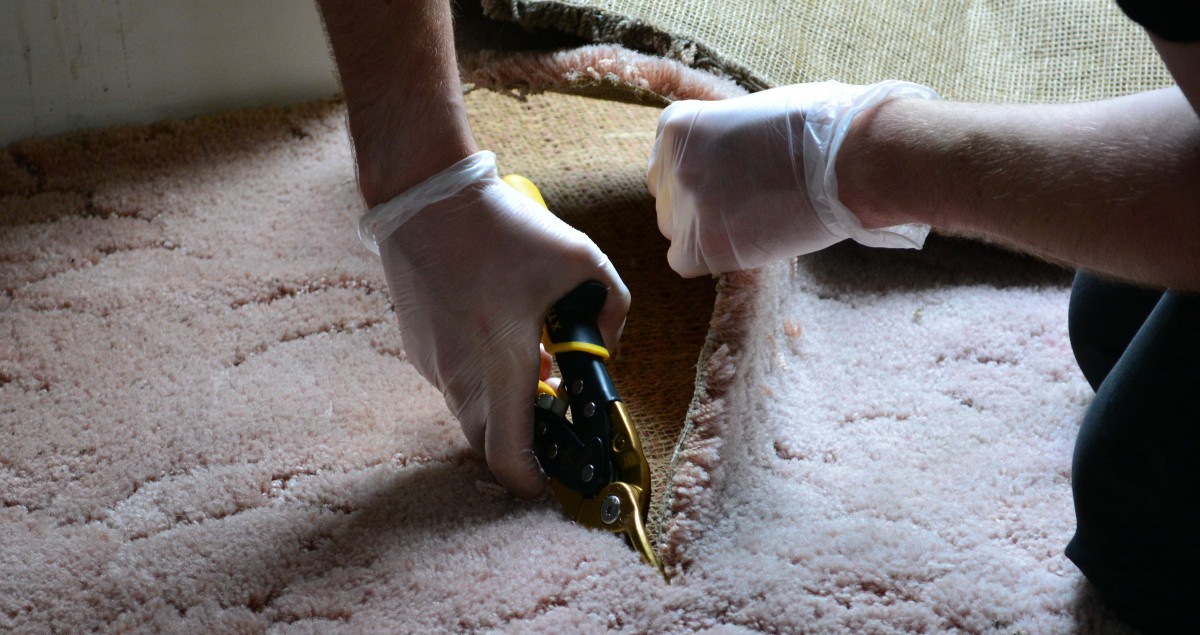 There’s nothing worse than walking over someone else’s carpets. Well, I’m sure there is, but it feels a bit gross, even if they have been fairly well looked after. They were old and we were dying to find the floorboards underneath to see what we had down there. So we started to take up the thick carpet in the living room, Richard cutting it out in big sections. We started in this particular spot because we noticed, once the previous owner’s furniture was removed, that the floor had dropped a good inch or two in one corner; something our surveyor had unfortunately missed. So we were also keen, if somewhat nervous, to find out why.

Initially, we used heavy duty metal scissors to cut the carpet, mainly because they were around and we couldn’t find anything better at the time. But we eventually found, through much trial and error, that a good Stanley knife was much faster: we just held the carpet tight and pulled the blade strongly along the section we wanted to cut. And no more tired hands – scissors and the like do tend to ache the muscles after a while of chomping through the tough base.

Unfortunately, this removing did reveal the presence of a particular species of spider living at the base of the skirting, which we were hoping to avoid; Steatoda grossa. This is commonly called the cupboard spider, and is related to the false widow spider (which we’ve also sadly noticed); both of which plagued us in our last house (not our fault – the house was rented and not very well looked after, which gave them opportunity to breed happily). So we vowed to seal up every last gap in the house and wage war (in an environmentally friendly, non-toxic way) against the little blighters.

After pulling up the carpet and it’s crumbling underlay, we ripped out the evil-looking wood and nail carpet grips. We found the best way to lift them up was by knocking a thin pry bar under the wood strip with a hammer, focussing at points directly under the nails. This loosened them so that we could pull them carefully off. Carpet removed, we could now see the dropped area of floor, and realised we had rot down there. Lifting the boards up, we found that the joists were rotten, as were the ends under the skirting. I prayed this wasn’t dry rot, and a quick Google did suggest it was wet rot (a small mercy!): the wood was damp and the rot was yellow/brown in colour, without the scary-looking white patches and fibres so characteristic of dry rot. We did notice that the rotten sections had woodworm though – and I managed to catch a couple of live beetles. More frantic Googling and we found this was the Common Furniture Beetle. A pretty rubbish day, but not devastating – at least it isn’t the Deathwatch beetle (and we cross our fingers that we never find any!). In the meantime, we cut the ends of the rotten, beetle-infested boards, back to healthy wood, and laid them down again. We also emailed our surveyor who came out the next day, and (thankfully?) confirmed our theories. He tells us that the lintel underneath the French doors has rotted away, leaving the ends of the joists unsupported. We need a new lintel – not expensive, and we can, in theory, fit it ourselves. So there ends another house renovating saga, and as with everything else, we conclude that it’s not great, but it’s not the end of the world. The house survives another day!